Viktorie Bartoníčková was the laureate of the Olga Havel Award 2003.

The Olga Havel Award 2003 was given to Viktorie Bartoníčková, establisher of the Civic Association Klub Afasie, which aims to help people who had a stroke, on the May 5, 2003 at the Trade Fair Palace – National Gallery of Prague.

Viktorie Bartoníčková was born in Hlohovec, is married and has two grown up children. In 1997, she suffered a brain stroke, and had to learn to walk and talk again. Shortly after the accident, she established the Civic Association Klub Afasie. Afasie means inability to talk which, as a result of brain strokes and head injuries, is a serious barrier to personal communication. If rehabilitation starts at early stage, there is much greater chance that the person will be able to speak again. Mrs. Bartoníčková´s experiences are convincing to the public and specialists in the very area as well. She has attended TV shows at the Czech Television. The Afasie Association aims to provide people suffering from a brain stroke and their families with information about the early stages of the disorder, early rehabilitation possibilities, and help them to return to normal life. Currently the Association offices are also in Příbram and the eastern Czech Republic.

The Olga Havel Award – bronze sculpture made by Olbram Zoubek “Encouragement“ – was handed over by Ivan M. Havel in the presence of members of the Board of Directors, senator Jaroslava Moserová, Ivan Douda, Miloš Rejchrt and Ljuba Václavová. 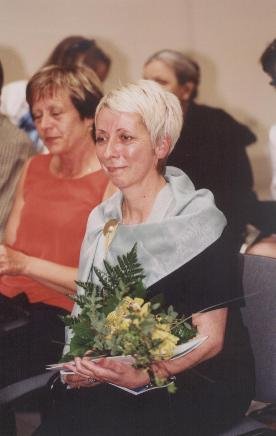