Iveta Pešková was the laureate of the Olga Havel Award 1997.

On the 5th of May 1997 the ceremony of the Olga Havel Award together with giving thanks to donors and colleagues of the Foundation, were held at the newly open Municipal House. The Award was given to Iveta Pešková, the economist from Prague. President Václav Havel and his wife Dagmar were present at the ceremony.

Iveta Pešková was born in Bratislava with a severe inborn musculoskeletal system disorder. She attended Business Academy and worked as an accountant and economist at Jedlička Institute in Prague for the Group of Representatives of Handicapped People and the humanitarian association Život 90 (Life 90). In 1989, she established the civic association Prosaz which deals with sports diving for young people with musculoskeletal disorders. She participated in organizing the world abilympics held in August 2000 in Prague. 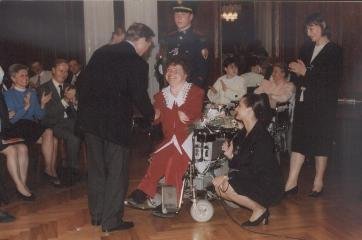