During the beneficial performance Velvet Havel in memory of Olga and Václav Havel, we celebrated the 25th anniversary of the OHF.

Friends, board members, donors and supporters gathered at the Divadlo Na zábradlí theatre on the last Tuesday in September to celebrate 25 years that have passed since the establishment of the Committee of Good Will - Olga Havel Foundation. Why exactly on the stage of this theatre? Director of the OHF Milena Černá reminded everyone present in her opening speech:

“Where else should we celebrate our anniversary than at this very theatre where it all started in the sixties! It was a glorious time of absurdist plays by Alfred Jarry, Eugéne Ionesco, Samuel Beckett, whose company was joined by Václav Havel with his grotesque dramas Zahradní slavnost (Garden Party) and Vyrozumění (The Memorandum). Václav Havel used to work at this theatre as a stagehand initially. And Olga was employed here as an usherette until 1968 when they both left. Therefore, our thanks go to this theatre for the opportunity to meet here and to celebrate the 25th anniversary of the OHF right at this place."

Even though the musical dramatic performance Velvet Havel is just loosely inspired by real life and work of Václav Havel, the audience was able to recognize very accurately the language, humour and familiar scenes from Havels‘ life. The project Velvet Havel by Miloš Orson Štědroň can be described as piece full of exaggeration and a sense of irony. After seeing it, the audience agree that the play rightly received many 2014 Theater Critics Awards. Besides The Performance of the Year and The Best Czech Play of the Year Prizes, Miloš Orson Štědroň, composer, pianist, librettist, musicologist and pedagogue was awarded also in the Music of the Year category; Miloslav Konig, in the role of Václav Havel, was named The Best Actor of the Year Award. Recently deceased Marie Spurná was selected as The Best Actress of the Year for her role of Olga.

Milena Černá wondered about the similarity between Olga Havel and Marie Spurná: “We regret that Marie Spurná, actress of the Divadlo Na zábradlí theatre, who was awarded for her role of Olga Havel in the Velvet Havel, died in August this year. It was a fate. The same fate came about to Olga, who passed away in 1996.”

By a performance full of humour that was close both to Olga and Václav Havel, we celebrated the anniversary of the Committee of Good Will - Olga Havel Foundation together with our friends and supporters. We thank them not only for their donations made by buying tickets for this benefit performance (the donations will be used to help people with disabilities) but, we thank them also for their long-term support. 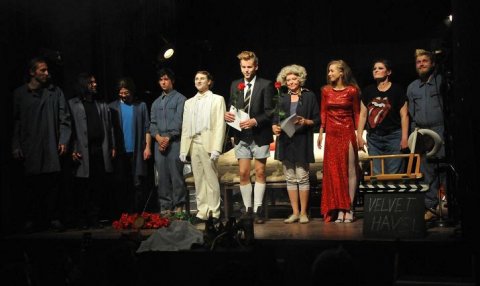 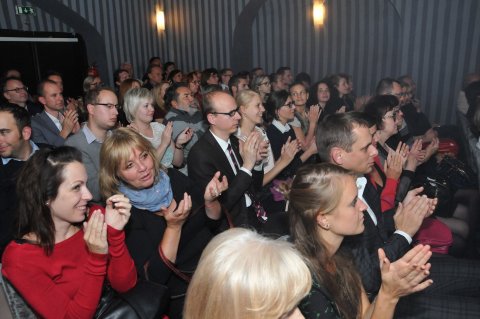