Together with the KŠB law firm you can support the Committee of Good Will - Olga Havel Foundation and check the artistic potential of the young generation of Czech opera singers and conductors during the 21st year of the traditional charity event. The concert, which will have the Advent spirit this year, will be held on Sunday, November 29, 2015 at 7pm in the concert hall – The Church of St. Simon and St. Jude in Prague.

The concert will be one of the few occasions during this fall on which it will be possible to experience performances of a conductor Jiří Rožeň (24) who will lead the PKF-Prague Philharmonia orchestra. Born in Prague, he is currently an assistant of Donald Runnicles, the principal conductor of the BBC Scottish Symphony Orchestra. He is also the finalist in prestigious international competitions and has previously conducted orchestras, including e.g. the London Symphony Orchestra, the Orchestre Philharmonique de Radio France or the Hamburger Symphoniker. Next year he will conduct a concert at the Prague Spring Festival.

A concert soloist will be tenor Petr Nekoranec (23), a member of the Bavarian State Opera in Munich and a winner of prestigious European competitions. He performed, for example, at the Prague Spring Festival this year at a concert presenting young talents. He is currently collaborating with Antonio Carangel, renowned Italian operatic tenor and teacher.

The main star of the concert will be accompanied by the children's choir Severáček from Liberec that has almost sixty years of tradition and performed in many countries in Europe, Asia and the USA. Works by Vivaldi, Bach, Händel, Bizet and Mozart will be performed during the concert.

If you are interested in tickets or sponsoring the benefit concert, please contact Mrs. Jana Šafářová on jsafarova@ksb.cz. 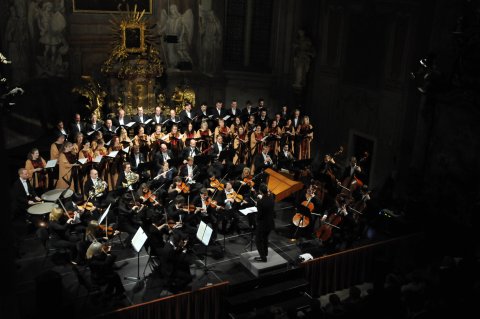