Project A2A or Charity Expedition to the End of the World

If you ask some of your English speaking friends in today’s globalised world about the precise meaning of somewhat mysterious abbreviation A2A, you may get an answer by question (because it could be easily deciphered as ask to answer).

However, A2A can also mean Atlantic to Alaska that is, by no coincidence, a name of the latest charity expedition of Pavel Drastik, who is a versatile athlete as well as a volunteer at the Committee of Good Will – Olga Havel Foundation, and his friends devoted to the same noble cause.

Pavel Drastik already repeatedly proved to posses a fair share of good will, admirable stamina and ability to do his very best under extreme conditions. For instance, he decided to conduct a physically exhausting bicycle journey all by himself from Prague to Saint Petersburg several years ago. In May, he even managed to successfully participate in one of the most difficult races of its kind – Ironman Triathlon at the exotic island of Lanzarote. Moreover, Pavel usually links his extraordinary sport efforts with help to particular people in need within the project called Sport for Charity. Thus, the financial gains from Pavel’s participation in Ironman went to finance highly expensive and vitally important treatment of little Oliver (you may kindly find more information in Czech here.

As a matter of fact, the charity expedition A2A started at the very end of November. First of all, Pavel Drastik and his Swedish friend Oskar Åslund flew from Norwegian capital Oslo to Lanzarote. From there, they both traveled by a huge ferry to the Canary Islands. According to their plan, they should continue accompanied by other friends on a middle-sized sailing boat through Cape Verde all the way to the island of Barbados which is situated in the Lesser Antilles more than 5000 kilometers far across the ocean. After that, they should continue through the Dominican Republic to sunny California. Approximately in the middle of January, the second phase of their exciting journey should begin. In many ways, it could remind us of the very best traditions and adventures of the famous characters from classic American novels written by Jack Kerouac and other great representatives of the so-called beat generation. The second phase is planned to be a road trip by a camper van across practically the entire North America. Additionally, it should be occasionally interrupted by downhill skiing as well. The final destination of their “quest” is supposed to be Juneau – one of the highest places of the marvelous state of Alaska. If everything goes well, they should reach it approximately in May 2015.

And what are actually Pavel’s main expectations from the entire expedition? “A key to true happiness lies in low expectations. Well, I suppose I do expect a little… I would like to learn how to sail on a big boat, how to navigate it according to the constellations of stars and then I certainly expect a superb skiing conditions with unparallel runs. Apart from that, one will definitely get himself into various remarkable situations and will meet a number of interesting people out there. That is not really an expectation, though. That is reality...”
As usually, the expedition is closely interlinked with help to those in actual need. This time, the financial gains will be used to purchase a special wheelchair for a paralympic athlete Lenka Kuncova. 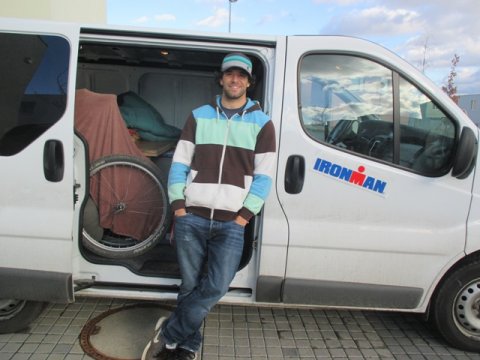