Thirty-nine year old athlete, father of three kids, financial advisor and investor Miroslav Motejzík from Strakonice lost his leg knee down in an accident. Despite his handicap he has actively participated in triathlons, and with his achievement supported those who because of their handicap couldn't do sports anymore.

“I am trying to live my life to the fullest. I take things as they are, making my handicap a benefit and keeping the sense of humour. Laughing does prolong life and I love my life!”

It has been almost ten years since the accident happened which caused you harm and disabled you for life.

Yes, it happened when we were coming back from a party in Strakonice. There was five of us walking when a car with a drunk driver hit us and I fell under the car. I woke up after ten days and had 31 fractures. I had to go through eleven surgeries. Today it’s a painful memory, which is already gone and left me with a greater pain threshold. I live in the present, looking forward to the future.

Did you perceive the situation differently back then and now - ten years later?

I have to say that I used to have various thoughts. I spent the first few months in bed, nostalgic and quite unpleasant. Positive changes came after receiving a wheelchair, which allowed me to move around finally. Since then I have been continuously pushing the limits. My biggest goal after the accident was to become even with healthy people and be able to live like them. Many things changed throughout those years. My health condition is quite stable and I have beaten my original goal many times.

At the beginning of May, you successfully accomplished the Prague marathon despite your handicap. How was it?

I have to admit it was complicated. After 2 kilometres a screw got loose in my prosthesis. It happened for the first time in last 18 months. I was able to continue thanks to the tool that I was given at the hotel Pod Věží, which I carried for the rest of the race. I am very grateful and I will return it together with a thank you note. After 30 km I was still close to finish a race in approx. 4h 40min altogether. Unfortunately, on the 31st km my injury started to hurt and I knew that I would limp the last eleven kilometres. However, I never considered quitting. I wanted to finish the race!

Is your preparation for sports performance different from healthy athletes’?

After amputation one needs to take care of the material as well. After each training I have to take care of the prosthesis and gaiters. Complications tend to appear in hot weather, when sweating limits their functionality. The prosthesis is set up, but when racing I have to change some settings. If it doesn't fit perfectly, it causes abrasion or a gall that could inflame. When this happens I have to take it off and use French crutches. Long races are rather about finishing than achieving better times or winning first places, those are not important for me.

You have achieved many sports achievements. Which one was the most important for you?

The most challenging was the 200 km long race Král Šumavy (King of Šumava) on a bike with a high (back then even giant!) degree of incline because I was not experienced enough. A race called Jizerská padesátka was also an interesting one. However, the most valuable was Mont Blanc. I climbed the mountain on August 8, 2013, eight years after my accident. It was a celebration of my 8th “birthday”. Mont Blanc exited me to such degree that my friends and I decided to climb mountains every year since. Last year we climbed Grossvenediger and this year we are planning to visit Italian Marmolada. Marathon is important as well, however, the true victory over myself is something else. For example Ironman…

In July you will participate in Ironman – triathlon race highly respected even by healthy athletes. How is your preparation going?

I train both individually and in group, depending on time. I rode a bike in Italy In March, I participated in a triathlon camp of Peter Vabroušek in May. Both these events were great experiences. We will see how the race goes. Ironman is my biggest challenge! Approximately ten Americans, mostly soldiers, with my kind of handicap, have finished the race and no European as far as I know.

You join racing with charity. What makes you help others?

My social sensitivity. The accident left me with a handicap and I became dependent on others. I lived at my brother’s apartment on the second floor and when I wanted to go out, he first had to take the wheelchair downstairs and then take me. He had to do the same thing when we were going home. Today I can do charity without limits. I like to contribute by active participation in sports, which is at the same time a great motivation for me. When I do something just for myself, I can easily find excuses. However, when I promise something to others, it becomes binding. I don't want to break my promise. Plus the positive feeling of knowing that I helped someone is priceless. 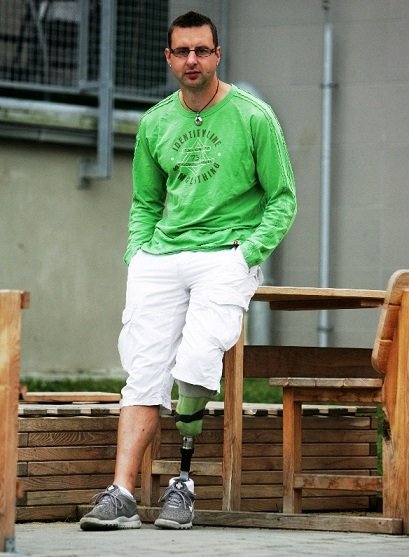 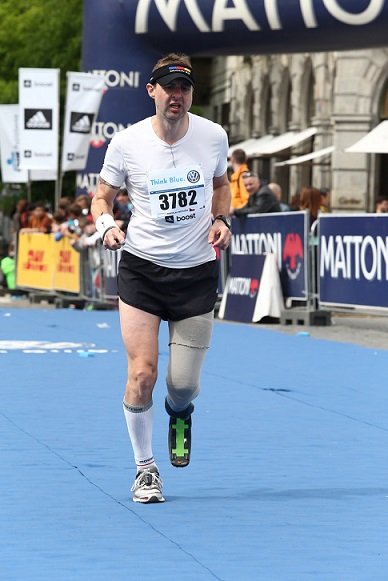