„Bike riding is my second nature!”

You will not come across the name of Magda Pištorová, Chair of the Supervisory Board of the OHF, that often. Unless you just examine the annual report of the OHF. Her face, however, can be recognized at many beneficial events and, her spirit and energy have been interconnected with the OHF for years.

What has brought you together with the OHF?
It’s a long story. After the /Velvet/revolution, we were running quite a successful law office where good teamwork and hard work came first, and money second. At the same time, we were aware of the fact that not everybody is well-off and that there are people out there who need help. That is why my colleague and I contacted sister Akvinela, establisher of the Home of the Holy Family in Řepy. We asked for her recommendation how to help the living-in clients with mental and multiple handicaps of whom sisters from the Congregation of the Merciful Sisters of St. Charles Boromeo took care. In about 1994, we began to organize auctions of products made by those very handicaped clients. The auctions then took place under the auspices of the OHF and the logo of OHF was also placed on the invitation cards.

Such events were rare back then. How did it go? Was it success?
The auctions took place at the Danube Palace Restaurant at Národní třída, where my office is located to this day. Hand-made products by the clients - pictures, pottery, toys, tie-dyed fabrics etc., were beautiful. On the top, the auctions were handled by a professional auctioneer. There was a real Christmas atmosphere there. People from the Home of the Holy Family perceived that their products were regarded with interest and, that their work could have been of benefit for them. In addition to the auction, they also performed some dancing and singing pieces. Finally, we prepared refreshments and food for them.

Now, who really were the people who used to come and buy the products made by the patients with mental and multiple handicaps?
As time went by, we found out that the auctions were not visited by clients of our Law Office - they were rather hesitant when it came to their money. The interest rather appeared on the side of our friends, other lawyers or financial counsellors who (often as if for fun of it) competed perhaps over some small cat-shaped piece and, finally, pulled the price up let’s say to 7,000 Crowns. We raised about 150,000 Crowns during the auctions. All the money went to the Home of the Holy Family. Several pictures bought by us at the auction are still hanging in my office and its hallway. Moreover, we also used to give those works as Christmas presents to our loved ones.

You are still interconnected with the OHF, aren’t you…?
I met Milena Černá thanks to the auctions and, since 1998, I have been working as a member of the OHF Supervisory Board.

More precisely, you are the Chair of the Supervisory Board.
The title is rather formal, the Board is a collective body.

How would you summarize the work of the Board in basic terms?
In brief, the Board evaluates activities of the OHF with regard to the law, foundation’s codex and statute. Spirit and heart of the OHF rest largely in Milena Černá and Dana Němcová. Mainly by them, together with other members of the Board, fulfilment of the OHF mission is fostered, meaningful use of contributions is monitored and, last but not least, resources needed to run the Foundation are searched and safeguarded.

Since January 2014, the Board has had one additional specific task.
According to the new Civil Code that came into force as of January 1, 2014, the Supervisory Board is competent to approve increase or decrease of the foundation capital that could be accumulated by, i.a., donations or inheritance. The Board is eligible to evaluate parameters of increased foundation capital or reasons for its possible decrease and, to oversee effective use of the financial means obtained.

What is the reason behind your long-term ties with the OHF?
Primarily, the initial idea of Olga Havel that made her to establish the OHF. I admire Olga Havel very much for that idea. Lately, at the exhibition of Jiří Jírů, also composed of photos of Václav and Olga Havel, I realized again that, at every picture, her look was modest, however, proud and self-confident at the same time. She was simply being herself. We should be grateful for having had such a First Lady! And then, there are the people I met in the OHF:  Milena Černá, Dana Němcová, bishop Václav Malý and other members of the Board of Directors as well as my colleagues at the Supervisory Board – Helena Navrátilová and Jan Stolár. Also, the younger ladies employed there - hard-working, nice and devoted to their work.

You are positive about others. How about you tell us something about yourself?
I was born and raised in Brno, where I also studied law. After my studies, I could not find a job where I could use German that I was learning ever since I was a kid. My mom did her utmost in order to make me and my younger brother speak German properly. That is why she used to send us to work in Germany during the summer breaks. Eventually, I moved to Prague because of work.

What was waiting for you there?
I managed to get a job in the foreign trade company where I was delegated to manage a legal unit – as a non-party member I was not allowed to be officially appointed to a leading position. At the time, I used to travel abroad quite often thus getting enormous knowledge and experiencing many new things. On the other side, one had also to realize the presence of the iron curtain. I recall one border control on the way back from Vienna: the border guards searched a suitcase of my colleague, so called “old school” lawyer from Prague. His suitcase was just stuffed with goodies for his wife - little pates, chocolates and stuff like that. And the guards dumped it all…

Those are not pleasant memories…
I worked in that company until the revolution. Then, me and my colleague went private. We passed the test at the Chamber of Commercial Lawyers, association of mainly foreign trade focused people – top lawyers with knowledge of foreign languages. First we became commercial lawyers, then counsellors.

You have established your Law Office in 1991. How has the law changed since then?
These days, it is necessary to have deeper legal specialization. Another trend, here like in Europe, is to run big Law Offices that spread around the world. Large companies appear while small offices are on decline.

Can you sense the decrease of clients?
Of course. Loss of clients cannot be replaced by smaller entrepreneurs as they don’t have time or money to solve their matters in a court room – the court proceedings take too long. So, instead of getting back IOUs, they rather sell them.

Do you still enjoy your work, even though the conditions have changed?
It is just like any other job: some business is interesting, plenty of business is a routine. Nowadays, I work in my office alone with only one personal assistant. When needed, we help out each other with other specialists.

What do you do in your spare time?
Ever since I was young, I have enjoyed cycling. Besides walking, bike riding is my second nature! I ride to get to my work in Prague but, most preferably, I ride in the nature. My husband and I used to have a cottage in the Krkonoše Mountains. My husband ran the cottage as a boarding house. I used to go there every weekend, bringing supplies, helping to manage the ski lift in the wintertime.  When my husband passed away, I wanted to keep the house - because of him. I had a few tenants who were only interested in seasonal profits made out of the ski lift and, who did not care neither about clients, nor about the boardinghouse itself.

So you sold it?
Yes, indeed. And I have bought a cottage near Blatná in the Southern part of the Czech Republic. We are like “My Sweet Little Village”, we follow old habits and customs, we have active voluntary firemen, tourist club in the neighboring village. We have established a cycling club and we ride our bikes in the surrounding area.

Where do you feel more like home – here, in Prague, or at your cottage?
At Blatná, for sure. It is less crowded there than Prague, and then the countryside! Moreover, there are almost no people of my age in the Prague city centre where I work and live. They come once or twice a year, otherwise they move out from the centre.

So how do you spend your time in Prague?
I go to concerts of pop music, to the theatre. I like paintings, I also like to take photographs. For ten years, I have been visiting classes of German literature in the Goethe Institute together with a bunch of ladies of my age (when a man comes we would still address the group as “girls”). These ladies are very active, they study the University of the Third Age, they travel… Simply, a great community, and the oldest one of us is 85!

So there are certain positives in the advancing age?
As long as one stays healthy and obsessed with curiosity or, rather eager for knowledge. If you get excited about something, you have to follow it and make some effort in that matter.

If you could pronounce three wishes, what would they be?
I’d wish health to myself, happiness to my family, and, to the OHF – to preserve the Olga Havel spirit by ongoing good course in activities aimed to help the needy ones  - according to the OHF’s mission. 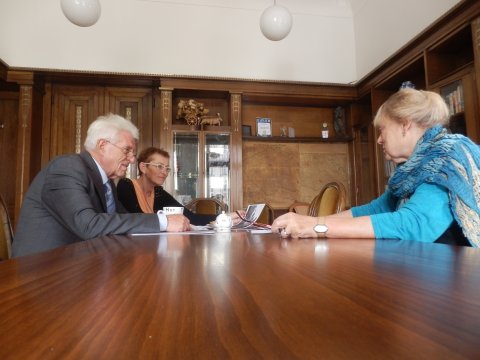