I spent one day at the Olga Havel Foundation, situated on the Senovážné square, Prague. I talked to the employees about how they spend their work days. My aim is not to literary explain the job description of the five full-time employees and head of the Foundation. During the interviews, I absorbed its local atmosphere, and my vision about the Foundation suddenly became more colorful.

One might think that a sad and serious spirit would prevail in such a foundation, since it´s a place, where people send letters describing their misfortunes and asking for help. Serious, indeed. However, the place is full of positive energy and one could hear laughing all the time.

You will not find grumblers here

“You know, every day someone comes to the Foundation in a positive mood, and brings new energy,” says head of the Foundation Milena Černá, describing the miracle of the local atmosphere. “In 21 years there have been lots of people from different areas, who met in our meeting room, and not once did we experience any argument behind this very table,” states Mrs. Černá and adds: “It is almost unbelievable, that there has always been this harmonic spirit. Karma of this place continuously strengthens.” How come it works so well? “There are no grumblers here,” she answers unambiguously.

Twenty-one years of working for one foundation! It almost counts for a marriage; where after more than two decades of co-living there comes certain dullness, numbness perhaps... “Do you mean to ask if I haven´t burnt out yet?” Milena reacts immediately. Her main job is to look after the projects and programs of the CoGW, and make sure, that they are financially backed up. “It is not even possible, because each day is different – I´d be lost without my diary,” she smiles.  Although some of the duties must be completed repeatedly, her days always differ. For instance the request letters, which are addressed to her. Each story is unique and she must assess whether it fulfills the grant requirements (and proceeds to negotiations of the Management Board), or it crosses the set borders – in that case the request must be rejected. “It is difficult to reply with rejecting letters,” she says thoughtfully. “I´m not sure if I could do it by myself, without relying on the rules and the decision made by our Management Board.”

I would expect, that such situations make one – a foundation employee feel miserable and helpless, and the fact that it is not possible to help everyone in need leads to depression. But the reality is different. “I have ascertained that things are progressing, although after two steps forward there usually comes one step backwards. Our greatest satisfaction comes, when we achieve, that a child with inborn deafness, which drags him/her into a limited world with no people or opportunity of abstract imagination, receives hearing aids early enough to attend school at the age of 6 years. Or when we help people, who experienced a major accident, to get back to work, and become useful for the others again. In such cases I realize, that the goals we set at the beginning are being gradually fulfilled. It is the source of my energy and confidence, that things are going the right direction.”

It strengthens me to see what others must cope with

Gabriela Bauer tells me almost the same thing, although using different words. She has been working for the Foundation for 11 years, representing the agenda connected with the Management Board. She is one of those, who deal with the sad letters coming from parents, to whom a handicapped child was born and it suddenly affected the whole family. “It does not weaken me, on the contrary, it makes me stronger, when I see how many parents manage to deal with this situation and carry out unbelievable things with a handicapped child just as if it was healthy. They are often able to adapt to the situation and I believe, that they thrive to live happily and complacently even in such difficult conditions,” says Gabriela and in one breath adds: “It is admirable!”

The Management Board meets 10 times per year and each time 50-60 individual requests are negotiated, and 4 times a year about 60 requests from grant proceedings are added. Gabriela is therefore quite busy with work, but she can organize it properly, so that she´s got enough time to deal with the inheritance and gifts agenda. Recently, she has finished her part-time studies in Psychology, which she can indirectly use in her current job.

She has never burnt out, she still glows!

The office next to Gabriela´s belongs to Eva Kvasničková. Head of the CoGW calls her a “Good Spirit of the Foundation”. She is the oldest CoGW employee, since she had got employed here two months before Milena Černá. She recalls the common beginnings like this: “I used to call her “šafářka” – she attended a school of film production and was qualified to manage everything properly. It still lasts even now. She has never burnt out, she still glows!”

Eva is an economic manager at the Foundation. She resist, that it is only about the mere administration. While getting rid of invoices of the requests, which got positive answers, she gets to all the letters, each of them representing one human destiny. And Eva is sensitive and emotional; however she tries to hide it behind the face ready to smile anytime. Other people´s pain hurts her – and it also happens with animals. She resents when people hurt them.

Besides the economic agenda she leads the Fund for Education – a project providing grants for students with handicap or from socially disadvantaged families. “You wouldn´t believe how much those kids have changed in twenty years!” she says. “At the beginning, it was touching, when kids from orphanages came to us as shy and modest, asking only for the most necessary. Nowadays, the applicants are sovereign, flaunting with their cell phones and taking for granted the opportunity to study at high schools and universities. They have made a big step, and do not pose children of commiseration.” Maybe for this reason she had the best relationship with the first receivers of the scholarship. She still keeps their photography, and to some of them she became their adoptive “mother”.

Sentiment, however, doesn´t keep her from humor, which she does not lack. “We also laugh while working. For example during the floods there was a lady, who called us and said, that her neighbor Máňa got a microwave oven from us, and she also wants it. And have you been flooded? I asked her. No, I was not, but I want the microwave!”

At the full throttle and neatly at the pace

Monika Granja has been representing the PR and marketing for seven years. She´s been doing it with ease and smile, as if it was an easy job – which it isn´t. She is skinny as a toothpick and quick as the wind. On the Foundation´s webpage (which she is responsible for) one might get blown away by all the activities, which she continuously organizes. “There will be a half-marathon this weekend, so we are preparing a news bulletin for the runners, printing T-shirts and getting ready for something new: we will be painting hearts on the runners´ faces, as the symbol of our Foundation,” Monika describes the upcoming event. “There will be more than 200 runners from ČSOB competing at the half-marathon for us, so I´m helping them with preparations.”

“Then I´m preparing a communication campaign for the Iron Man event, which will be this year for the first time organized in a way, that its participants linked to the Foundation could raise some amount of money for the CoGW. And in two weeks, there will be the Olga Havel Awards event – one of the main activities, which I have to pass to the media properly. It is going to be the twentieth year of the Award ceremony, for which we will publish not only the Good News magazine, but also a brochure introducing all the laureates of the Award for the past two decades,” explains the current affairs, which she´s been working on.

It is obvious, that she is at full throttle. “I enjoy when things are happening all the time. Even the smallest task brings at least some communication with people, and that´s what I love. It feels amazing to see positive results of my work, especially when I know, that we actually helped someone. For instance when we connect a grant applicant with our donors, that burden of sad life stories  gets covered by the fact, that we can really help those in need to overcome their misfortunes.”

Soňa Brišová has been employed as director´s assistant for two and a half years. Milena and she had got to know each other before from various meetings of non-profitable organizations. Today, Soňa leads the secretariat with everything linked to it: mail, registration of applications, actualization of address books, sending out invitations, notes from the meetings... “I´m having some technical issues with printing addresses on the tags,” she sighs, “however, it should be OK soon, when we get a better program.” Her relationship with technologies is supposedly user-like, so if a problem occurs, Gabriela comes,” says with giving her credit.

Soňa spends lots of her working time on the phone – a little time off the merely administrative work. “We also have fun with them,” she says. “Mrs. Černá, for instance, holds a protective hand over one Roma, who has been raised in an institute. He´s got a real Roma temperament, which he usually pays a price for, although he usually means things in a good way and tries to care for others. In recent years, he´s finally settled and started to organize various festivals and other events near his home-place. He aspires to be seen as any other person trying to achieve public benefits, and not dismissively as a Roma. It´s going to be his birthday soon, where he invited the town mayor, and also called Mrs. Černá to send him a little gift with a wish. He would like to flaunt, that he´s respected and appreciated at the OHF...”

We don´t get sad!

Eva Kocnárová has been working here part-time since Spetember 2011. She takes care of the projects Salzburg medical seminars and Comunitas pro praxis. “My work day starts with creating a to-do list and continues with crossing out the completed tasks. The list usually includes dealing with e-mails, administration of the two projects, website update, research of similar projects abroad, communication with kindred subjects about cooperation, and others. Ideas, inspirations, and solutions sometimes come unexpectedly, outside the working hours – in that case I put them on the top of the list,” she says.

“If I remember the last time, when we had fun?” she reacts on the set question. “I cannot remember a situation, when there was a sad atmosphere in the Foundation! It is nice to work in a relaxed environment, without any tension and stress.” And these words are repeated quite often in the afternoon talks, just as the sentence: “We love it here!”.

Hana Fűleová feels the same. She has been coming to the CoGW as a volunteer since January 2014. “They greeted me with open arms,” she says. “I appreciate that friendly, respectful, and pleasant atmosphere, which reigns over the place. Although it is a girls club, I don´t have any problem with it!” 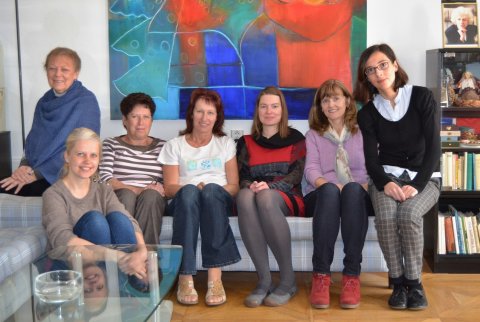